Tolulope Yesufu, CEO TSHINE PRODUCTION is a hardworking, humble, God fearing lady with so much creativity in her. 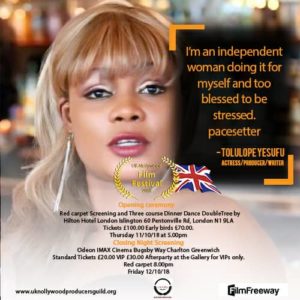 From a wealthy but humble background, she has always been a go getter and risk taker. She started her education at Chrisland Nursery/Primary school Opebi Lagos, went on to secondary school in Akure and graduating from the Federal Polytechnic Offa in Marketing.

Tolu started her acting career in 2008 in the UK and Produced her own movie in 2012 titled. SHATTERED HEARTS, a movie she also wrote and acted in alongside veteran actors Lanre Balogun, Titi Jacobs , Rita Edochie , Nigerian Actor Tony Monjaro, etc. She has since been unstoppable and gone on to write, Produced and acted is a lot of movies that has shown her excellent talent, creativity and versatility and also gone on to win several awards in the categories of Best Actress, Best Producer, Best Movie, Best Screenplay.

Her latest movie titled HELP!!! Is a movie she has created to bring awareness to the level of Domestic Abuse our Men are SILENTLY facing and dying from within the society.

HELP!!! A four cast movie, first of its kind in the UK Nollywood industry is a movie that defies all norms. Tolulope as a writer and from her past movies is a lady who writes her scripts based on the ills within the society and the African culture as she aims to entertain and educate the public.

Her last movie Murderer in Law, even though a drama comedy was aimed to touch on the issues of mother in laws and their daughter in laws in the society at large and how the usual discord between them can affect the family as a whole. Her new movie HELP!!! Soon to be released has also followed this educative trend but this time on Domestic Abuse in all its ramifications.

Tolu doesn’t just write, doesn’t just Act and doesn’t just produce movies all for the sake of doing it , but she does it with a purpose , to reach out , to entertain and to educate. 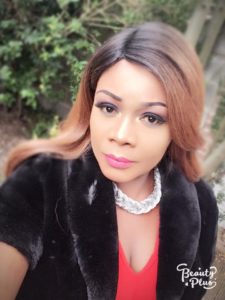