Malcolm A Benson is the brain behind the Benalex Media Brand. He is a Lawyer and an Actor who also Writes, Directs & Produces a number of films through Benalex Media. Some of the successful projects are Phantom of Fury, Ortega and His Enemies, Lads in The City and Return of The Don etc. He also works with other film makers to produce films such as Gold Dust Ikenga etc. He directed the film Forget The Pact and launched two TV shows called Take 101 and Show4Africa TV
Biography of Malcolm A Benson.

Malcolm A Benson is a multi award winning Media Professional and the CEO of Benalex Media based in London. He is an Alumni of London Metropolitan University having obtained two Academic Hons Degrees as well as a Post-graduate diploma and other undergraduate qualifications in the same University. His first academic degree was in Professional Studies in Education (BA Hons) followed by a second degree in Law (LLB). He then went on to do an LPC before joining a Law firm in London where he now practices. He is a Mentor and has mentored a number of students at the London Metropolitan University as well as in the film industry. M A Benson also qualified as a Teacher before following his passion and extending his reach into the Media and Entertainment industry. He is a Film Producer, Actor, Director and Screenplay writer. He won Best Actor and Best Producer at the African Film Awards in 2016 and 2017 consecutively. He has produced a number of films such as ‘Phantom of Fury’; ‘Forget the Pact’, Gold Dust Ikenga, Lads in The City and ‘Ortega and His Enemies’, which had picked up 14 Film awards nominations.

Malcolm Benson’s Film Premiered in Cannes twice and was chosen and screened at the Mache Du Film by the New World Cinemas in Cannes. M A Benson has been Nominated Best Director, Best Producer, Best Screen Writer and Best Actor by the Los Angeles based NAFCA Prestigious Awards, BEFFTA Awards, ZAFAA Global Awards and African Film Awards in 2016 Awards seasons. In previous years M A Benson has amongst other awards also picked up the ZAFAA Best UK Film Director and The Life Changers Award as a Champion for Art and Culture. He has also won the Gathering of Africa’s Best (The GAB Awards) for his contributions on the promotion of the positive image of Africa and Africans through The Arts. 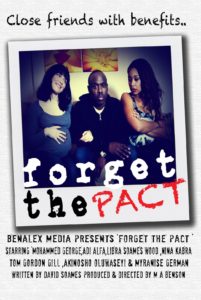 His many TV productions are shown on flagship sky channels such as Nollywood Movies Channel 329 and Vox Africa Channel 218. This includes the high profile ‘Show 4 Africa’ and ‘Take 101’ which have attracted widespread media appeal. Take 101 is a documentary TV series that helps film makers especially new, young and upcoming ones to learn the A to Z about the film making process. Take101 aired on Vox Sky Channel 218 English platform. Not long after the successful UK movie premier of ‘Ortega and his enemies’, Benalex Media hit the screens with Take 101, a 26 part, 15 minutes documentary series about film making. From concept to reality, from idea to motion picture, Take101 interviews industry professionals, taking its audience through the A to Z of film making. This educative yet highly entertaining documentary gives its audience a deeper insight into life in the showbiz industry, which include; screenwriting for Micro Budget Films, the A-Z of digital filmmaking, planning, pre-production, scheduling, casting, marketing & Selling, all you need to know about producing your first movie and more.
Take 101 also looks into selling movies/scripts to Hollywood, Africa and Asia, as well as showing its audience film reviews and critical analysis on films made, especially by British, Ghallywood and Nollywood film makers.

Forget The Pac – Produced and Directed by Malcolm A Benson. A Benalex Media Production

Three close friends make a pact never to get romantically involved with each other but when true emotions kick in they soon learnt not to make promises they cannot keep. With Mo George, Adi Alfa and introducing Libra Soames Wood. Written by David Soames,

Ortega and His Enemies

Following the successful premiere of his film “Ortega and His Enemies” which saw the Odeon IMAX Cinema Greenwich Big Screen sold out, Director M A Benson Nominated as Best Director in Zafaa 2014. showcased his multiple awards film Ortega and His Enemies in London. With five African Oscar 2014 Nominations and wining Best Actor and Best Actress in Beverly Hills Los Angeles plus Four Nomination in African Film and Academy Awards ZAFAA 2014 United Kingdom a second Premiere was done in 2014 at Genesis Cinema, Whitechapel, London E1, in addition to screening his previous short film Forget the Pact nominated in 2013 for Golden Orchid Award in USA

“Ortega and His Enemies” is an original and intriguing British drama with some Nollywood twists. The film set in London and Essex unfolds the life of an anger management patient John Ortega (played by Darrel LasQuevas) whose world is torn apart when he cannot manage Sara’s adversaries(his fiancé played by Adi Alfa). With deceit, brutality and police chase, will John be able to overcome the forces of antagonism from DC Martha, Maxwell Toby, Sara’s step dad, the cross dresser, ex-police officer, The manipulative Lee (played by Alexandra Johnston) a vengeance seeking single mum and Franklin Macintosh (played by Dean Ekperigin), Sara’s ex-boyfriend who would not take no for an answer. With these enemies’ individual evil plot against John, will he survive and still make it to the altar with his soul mate Sara?

M A Benson is actively involved in the community leadership, fund raising and empowerment projects. He has worked actively as a committee member for three Former Mayors of the London Borough of Waltham Forest and two Former Mayors of London Borough of Enfield raising money for various charities. He is a committee member for delivering the successful Nigerian Centenary Awards UK 2014. He is a founding member of the Actors Guild of UK Nollywood as well as the President of the UK Nollywood Producers Guild. M A Benson has won the GAB Award 2016 at the Gathering of Africas Best for his contribution to the promotion of a positive image of Africa and Africans worldwide in The Arts. He has also won the African Entrepreneur Award 2016 and The Life Changers Award as a Champion for Art and Culture being driven by his passion for giving back to the community. Malcolm A Benson is a much heralded industry leader and champion.
Some of his work can be found on Facebook M A Benson, Twitter MabensonFilm, IMdB Malcolm Benson, Instagram Mabensonproduction, etc.